WHAT: The 4th European Regional Assembly
THEME: Keeping Alive the Friendship of Rizal and Blumentritt in the Future
WHERE: Prague and Litomerice, Czech Republic
WHEN: September 18 and 19, 2009 with Welcome Party on September 17 and Blessing at the Infant Jesus of Prague Shrine (Sto Nino de Praga) on September 20.

Musical rendition by multi-awared Broadway Performers, Jon Joven and Rachelle Gerodias. Program is coordinated with the support of Cultural Club Prague-Aachen, The Philippine Embassy, Ceske Budejovice Museum, The City of Litomerice and the Prague Art Support. Speeches will be simultaneously translated into Czech and English.

7:15 pm – Bus is park along the Parizska Street to bring the Delegates to PM BAR 7:30pm – 12:00pm - Welcome PARTY at the PM Bar. (Food and Drinks) Keynote welcome remarks by Regional Commander Sir Antonio Guansing, KGOR. (Details of the program will be published later) 10:15 pm – Bus is park in front of the to PM BAR to bring the Delegates back to the hotel. Bus leaves at 10:15pm, 11:00pm and 12:00 midnight.

9:00am – 45-minute bus travel to Litomerice. Bus is parked at the Top Hotel. 10:30am – 12:00 Travel to Litomerice with a short tour of Litomerice, the Garden of Bohemia in the 17th century, and its historic glory with Gothic, Renaissance and Baroque buildings, protected under an urban preservation order which for the most part is encircled by well-preserved Gothic fortifications. Upon arrival in Litomerice will be floral offering to the final resting place of Prof. Ferdinand Blumentritt and in the Rizal Park. 12:00pm - 1:45pm - LUNCH 1:45pm - 5:30pm Assembly meeting at the Theater Hall (Details of the program will be published later) 5:30pm VISIT to Blumentritt-Rizal Museum 7:00pm - 10:30pm DINNER and evening PARTY at the vineyard. 10:30pm – Return to Prague - Bus is parked in front of the Litomerice City Hall.

8:45 am – meeting place – Top Hotel Congress. Bus is parked at the Top Hotel. 9:15am – 12:00 am – ASSEMBLY at the Conference Hall of the Charles University, the largest and most prestigious university and among the oldest in Europe, founded in 1348 by Charles I, the King of Bohemia, later known as Charles IV, the Holy Roman Emperor. Program includes keynote message from Supreme Commander, Sir. V. Esguerra, KGCR. (Details of the program will be published soon). Opening music by Victoria Matveena, violinist. 12:00am – 1:30pm – Buffet LUNCH at the Charles University 1:30pm - 4:30 pm - Bus TOUR to the Prague Castle, passing trough the national theater, national museum, the Opera, the national gallery and other monumental landmarks of the city of Prague. Meeting place – Bus is parked in front of the Charles University. 4:00pm – 5:30 pm - Coffee-BREAK at the Archbishop’s Palace by the Prague Castle. A very rare experience in a Renaissance, Baroque and Rococo, seat of the Prague Archbishop. This Palace was given by Emperor Ferdinand I to the Archbishop in the 16 th century. It has been the Archbishop residence ever since. 7:30pm – 11:00pm - DINNER Boat night cruise at the largest floating boat along the Vltava River, the Sumava. Party and Concluding Remarks. (Details of the program will be published soon) 9:30pm Exclusive FIREWORKS for the Knights of Rizal at the Vltava river. The Boat offers the best view anywhere in the city. 10:30 pm – Bus is parked in the boat docker to bring the Delegates back to the hotel. Bus leaves at 11:00.

9:45 am – Meeting place – Top Hotel Congress. Bus is parked at the Top Hotel. 10:30 -TOUR to Sto Nino de Prague Shrine Museum’s collection of the Sto. Nino Garments. 11:00 - Private CATHOLIC MASS Service at the Shrine of the Infant Jesus of Prague. 12:00 – LUNCH at the Shrine Garden. 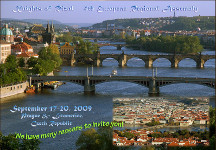